Over the past months I have been tapping away at keys, collecting scans of artworks old and new and even a lot of forgotten works, in order to make a very intensive book of my works to date.

At first, it was only going to be the Airships and Tentacles series, but I began to use “lost” artworks for section endings, and decided I should include old paintings from before the series, as well as all of those pieces I have worked on during the series as album covers, book covers, commissions, illustrations, or things I did during the series just to clear my head and work on something different. It even includes a few samplings from my-yet-to-be-published literary works, and some pieces I’ve done relating to the works of others (Voltaire, Clive Barker, Dexter Palmer, Bethalynne Bajema, and others), and collections of doodles and sketches to decorate text pages (such as the Table of Contents, Words from the Artist and other sections)

The book has a cover specially designed by Bethalynne Bajema from my existing artwork, and I *love* what she did with it. Click the image or link below to view as a PDF online, or right click (recommended) to download and view in 2-page side by side book format.

This book is available NOW as a preorder, shipping August 5th. Click here to buy.

Well, it looks like I am devoting myself this year to finally finishing up my children’s book – but for now, I am working really hard at making our kickstarter successful.

We are beyond dedicated to making this happen… so much so that I stayed up all day and night putting this special drawing together (image below), which will be available in printable PDF format exclusively to everyone who donates $1 or more though our Kickstarter.

A $2 purchase of a good piece of fine art paper from your local craft store, plus this download, and you’ll have this silly piece of my steampunk storybook for your wall… $3 total investment, and no shipping.

We’ve also received an unpublished text by G.D. Falksen to add to our kickstarter offers: An Original Never-before Published Exclusive Short Story by award winning author G.D Falksen; You get a hard copy of the short story in a binder, decorated with exclusive print by Myke Amend (an illustration of the story within) – each illustrated cover HAND EMBELLISHED, numbered, and signed… making for a *very unique* work of literature and art combined.

We’ve had some good fortune this week, blogged by Warren Ellis, tweeted by Neil Gaiman and Kyle Cassidy, you may have seen us mentioned by Vernian Process, Abney Park, Nancy Overbury, and other greats… who we will be sure to mention more in depth when we compile our big list of People Last Against the Wall…

Please help us to keep this momentum going. 7 days remain, and we are nearly 30% there. Your donation of $1, retweeting, reblogging, or otherwise spreading the word of this project can put us over that hill.

Painted on birch panel in acrylic paints. Even the images below can’t possibly give you a good look at all the detail in this piece… but that is the story with most of my works.

This piece took me 2 + 2 days of no sleep, painting from waking till crashing.

“Break time” for me is a matter of choosing 2 or 3 days in which to do art other than the art I *should* be doing, and I tend to cram as much art into that time frame as I possibly can. This time around, I decided rather than several engravings or several small paintings, that I would do one painting, break far away from my typical American Art Movement or Luminist style, and delve into something more Art Nouveau or cartoony (I chose somewhere between ‘both’).

If you’d like to see the fine details (minuscule scales, blood vessels in the eyes, variegated petals, and all the fine lines which hold them in), you’ll probably need to buy the original (here), or buy one of the 20 available full sized giclees (here), *or* buy one of the 10 by 20 inch metallics (here) 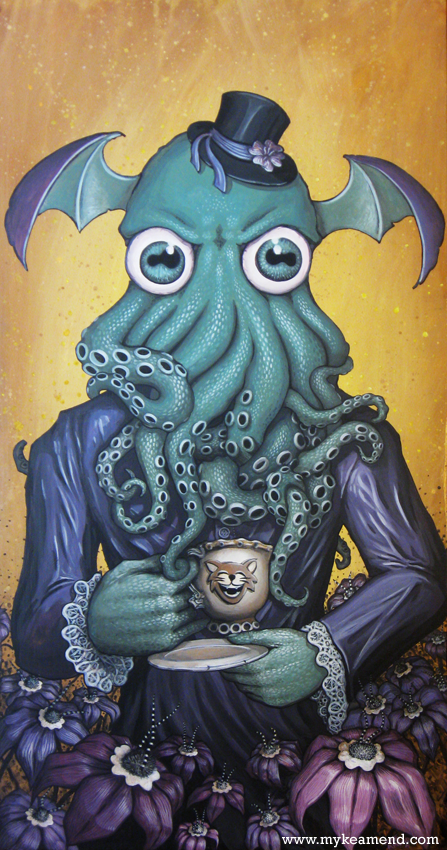 Reign in Purple: 12 inches by 12 inches in acrylic on wood panel.

You may already know about “Pride and Prejudice and Zombies”, written by Seth Grahame-Smith, who is rumored to have recently signed a deal to write “Abraham Lincoln, vampire hunter”. “Sense and Sensibility and Sea Monsters”, written by Jane Austin and Ben Winters continues this soon to be trend of making strange fiction of classic fiction.

The trailer (found via The Daily Kraken) is so brilliantly and perfectly executed that, though I cannot wait to read the book, I must admit have an even greater desire to see the movie.

Today, I found via Cephalopod Tea Party that Humbolt Squid have finally begun to heed my requests, and are now beginning larger and more organized attacks on mankind and cameramen.

Unfortunately, I cannot share the video here because even on youTube, ABC news has it too heavily locked down (they suck), but you can and should view it here.

You can also see the full cover for this book, and read more about this book and books like it at the original article from The Daily Kraken – a great source of interesting things and other stuff.

Here are some brief details about things to come, and a even a handful of things that were.

Artworks as Prints, Old and New:

Old: I have found some art I thought forever lost. I have also remastered some older works to print more boldly and brightly, and have taken to refining some of my older digital works. Some of these are things I’ve previously sold open edition prints of – about one to ten total for each of these, making those older versions incredibly unique – though their existence undocumented except for here in this entry and previous posts about them. For the newer remastered versions, I plan on making some limited editions out of them – on fine art paper, with signatures, and certificates.

In September, I am slated to share pages with Bethalynne Bajema, Brom (wow!), and other fantastic “gothic artists” who are not Brom (wow!), in an art compilation book. When published, I will have links to that book from this site. I am unsure what details I can disclose at this point, but cannot wait to talk about it.

My comic book, “Some Ghouls Wander by Mistake” is currently in the pre-press stages, and on its way to print. Release date is mid to late September, just in time for Halloween. I have worked on and dropped this project many times over the past years, beginning anew each and every time I picked it back up… meaning I have been talking about it forever, ad nauseum. Be relieved, very relieved, that I will soon be talking about its release in present and past-tense.

My spooky, crazy weird children’s book, which will probably plant a lot of bad ideas, and therefore should not be read by, to, or around children – that will be out by the end of 2008. At which time family-oriented groups will protest outside of somewhere, in celebration of this great work. Previews will be here when I go to press.

Also, I am working out the details on illustrations for two novels: one horror and one fantasy, which will likely be done under the same general agreement.

In October, Bethalynne will be gracing the pages in another wonderful art compilation by Goth Magazine, it is a Steampunk Compilation featuring over 100 amazing artists from this genre.

“Goth Magazine is producing a full-color oversized bound book of steampunk fashion, gadgetry and artwork.  Featuring the costuming of Enigma Fashions, Heavy Red Clothing, and editorials by Derek Caballero, actor Crispin Glover and more than 100 more artists, this will be the largest collection of steampunk imagery in one book…”

“…It will be available via GOTH Magazine, Barnes and Boble, Walden Books, Borders Books and retailers worldwide.”

I am not quite sure yet whether I will be on time to catch this boat, but go Beth!

Bethalynne Bajema and I will be jointly creating a new piece of artwork for another great Steam Punk icon, their name to be disclosed at a later date. All I can say is that I am thrilled to be working on this new piece, and will be doubly thrilled to see it released in a few months. Available here will be fine art prints and limited editions (95 giclees on canvas, 195 metallics, and 395 giclees on art paper) .  “Branded versions” (versions with the band’s logo) will likely be available as poster prints, Cds, t-shirts, desktop graphics, screen savers and/or other things through the band’s site come October.

Long, long ago, my coming was told in a rather non-flattering series of images crudely carved into stone with poorly engineered tools. The perpetrator, being human, is by now surely dead, and it serves him right.

“Quench” by Zack Parker, is soon to be released everywhere on DVD October 28th, 2008 by Vanguard Cinema.

My artwork makes a good number of cameos in this piece, as many of my paintings make a personal appearance set design and props in this renowned, dark spooky, Modern Gothic Tragedy. If you are interested in pre-ordering a DVD, you can do so at Amazon for only $17.99

“Diary of the Dead“ – I watched it last week, I didn’t like it, for many reasons. I disliked it so much, that I erased from my mind that I had even seen or rented it – and now I owe late fees, which I should bill to George Romero accompanied by a request for a refund on my $3.99 rental fee, and a bill for the time I spent hoping it would get better.

I am not on Wikipedia. In order to do so, I would probably have to do something incredibly important for humanity – like hitting myself in the balls on camera, being obese on camera, getting killed by a squirrel, stapling things to my butt, or begging the public to leave some famous celebrity alone. I will likely be doing all of the above soon, and in that order.