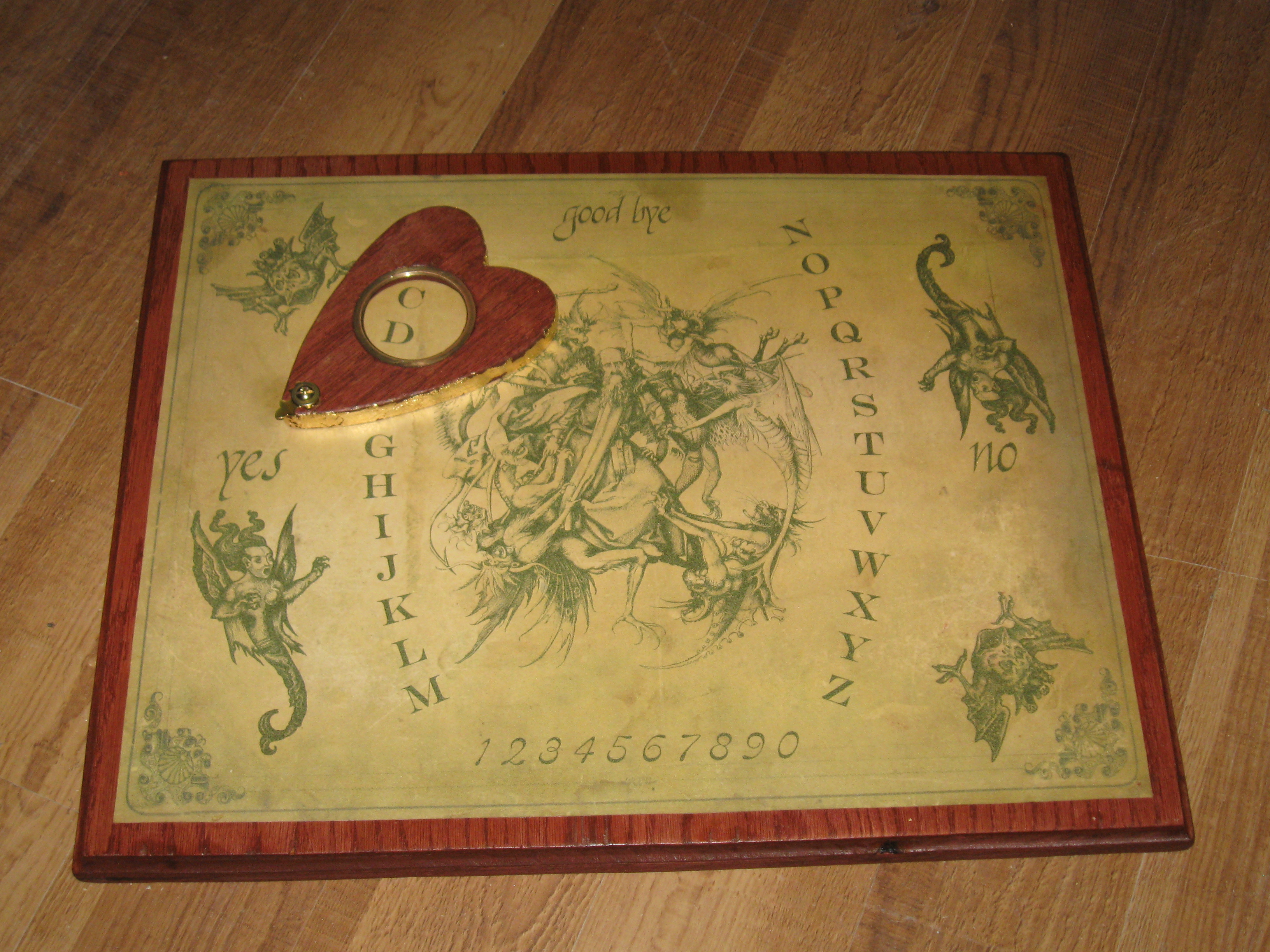 Bethalynne is still in the hospital – misscarriage/ectopic pregnancy… and we’re hoping she won’t need surgery; Two days of hospital so far, and the drugs don’t yet seem to be doing their trick, but we’re hopeful.

Of course this happened on the day before we were to launch these, so I do not have access to her photographic skills for these boards. Also, we are trying to sell some of these, or some of anything in order to cover prescription and aftercare costs once she is released – as well as to keep me in gas and road food for hospital visits.

Anyway, about the boards:

These boards are designed by Bethalynne Bajema, with woodwork by Myke Amend (me).

The boards measure 15×18?, are made of thick 3/4 inch oak, stained a deep red cherry, and are coated in varnish and then waxed for an easy gliding of the planchette.

Edges are ornately routed for an added decorative touch, and some of these have gold leafed edges as well.

There are only 6 available in each edition – each are sealed to the buyer’s specifications, and can be decorated with added touches. Each are also hand-signed, numbered, and dated on the back by both artists.

Each planchette (optional) is uniquely made by Myke Amend, cut from oak, and stained deep red cherry, accented with hand-shaped brass, and gold leaf – no two planchettes are alike. I am letting the saw guide me for each one, and I also have to pick and shape pieces of brass from my found brass box – so each planchette will be designed to fit the buyer and/or the board (if a board is purchased with the planchettes… planchettes can be bought on their own).

All of these are available here: https://mykeamend.com/products-page/?ptag=planchette

I realize that not everyone has money for boards of these quality on short notice – so of course these are not the only things I am raising funds with. Anything bought from my store will help us out.

All of these are available here: https://mykeamend.com/products-page/?ptag=planchette

The Destination 1111 show gave me the opportunity to show a number of works that I hadn’t previously been able to show at any official showing or convention.

Speaking of which, I now have several current and ongoing art displays running, which I recommend if you are in the Massachusetts, Northern California, or Illinois area; They are at: Gallery Nucleus (Alhambra California), The Charles River Museum of Industry and Innovation (Waltham, Massachusetts), and Gallery Provocateur (Chicago Illinois *beginning October 30th*).

Some of the works I showed at Destination 1111 dated back as far as ten years ago, one or two have been available here as prints for a while, but there were a handful of them which I had never been able to offer here, and was unsure whether to offer here. Not that life for me has ever been all that easy, but several of these pieces were from an exceptionally rough time, which made me hesitant to show them … But, given their reception at the 1111 show, and because they were widely requested, I finally decided to have them imaged.

This week, Jim Gebben, an extraordinary photographer from Grand Rapids, who I met during our Artprize run, spent some time taking some fantastic high res photos of my non-imaged works – so, I am not only finally able to offer prints of these, but finally able to offer some more originals as well.

Here are some of the new offerings:

The Day You Died: Available as:

The Wait: Available as:

This artwork is three in one.

The box/dual frame: I labored hard for over a week on the box, which is a very sturdy hand-built, hand-stained, hand-varnished, hand-waxed chunk of quality hardwood (heartwood select pine base and birch sides). It not only serves as a box (if you would want to use it as such a thing), but as a self-contained double frame which requires no wall hanging. It is perfect for a coffee table, end table, mantle, dining table or most any flat surface you would like to display it on… and it is so sturdy in construction that you won’t be freaking out if people get near it.

The box has two decorative hinges with a decorative patina on the spine edge if it; The latching mechanism is self-made from another smaller version of these hinges, combined with three solid brass model cannons from a model ship. The latch holds the piece securely shut, but opens easily when you want it to with a slight squeeze of the box and an easy flip of the thumb.

Sometimes antiquing involves making something look beaten and ratty, sometimes it is a matter of making something look like something of quality kept new by an archivist or generations of enthusiastic caretakers – quality and new as the day it was made. For this particular look, I went with making it look like somewhat well-maintained antique… something once very expensive, polished periodically by its owners – well protected, but also well-used.

This sort of antiquing makes it much more involved than the other two. When I do this sort of antiquing on fresh and new untreated wood, making it look fashionably old is essentially a process of finishing and refinishing it to duplicate what time would do: Creating many stages of maintenance and multiple areas of color to create the look of something old… dark areas near crevices and hard to reach spaces, lighter areas where regular wear might occur.

The Art: To make these illustrations mesh well with the box, I made them in this dark-carnival, old Victorian occult ephemera style, with a lot of metaphysical flavor and a touch of campy horror propmaking. It not only made them work well with the box I envisioned, but made them fun for me and strikingly bold… a primitive and stark contrast to my normal reserved and detailed works and my muted color palettes.

Painting One: “Red Right Hand” this is one of two pieces done for a collaborative collection of China Miéville inspired illustrations and artworks, an effort assembled and coordinated by John Straun of SuperPunch. The Handlingers are mind-controlling creatures which look much like a human hand with a snake’s body. I decided on red for my colors because I wanted the hand to be red, and I might it a right hand just so I could name the piece “Red Right Hand”, because I am a huge Nick Cave fan.

Painting Two: “Weaving Spiders Come Not Here”: I often name images for all of the phrases that swim around in my head. I don’t know what it is about soliloquy, sayings, proverbs, historical quotes and other such things that causes them to remain so well-embedded. I start working on a piece, and once he concept is in place, I immediately think of some string of words that fits, though usually a twist thereof. Rarely does the phrase inspire the piece, but the piece typically inspires the title, and the title sometimes shapes the work… this title coming from Shakespeare, or the once-curious reliefs seen outside of Bohemian Clubs. “The Weaver” is a large sentient spider with hands on its forelimbs (I also put them on its Pedipalps), with a love for scissors. The Spider with scissors brought this phrase to mind, so rather than repeating the more circular designs from the previous painting, I made them weave like webs, being cut by the spider.

All three works – the dual frame box assemblage, and the two paintings, are available as one piece in the originals section of my store.

Just a few projects I am picking away at. If you want some step by step images on these, you can go to my flickr account (flickr.com/mykeamend)

1) Book with embedded faux bone seal/cameo. Materials: Brass, wood, polymer clay. I want to fill this with writings and drawings on skin, to give it a really eerie, creepy, “kids would be up all night for weeks if they ever entered the room they weren’t supposed to” feel. Human skin is out of the question, legalities and all – vellum will have to do, but such is out of my price range for the moment. I guess this will have to wait to be filled up.

2) Box with embedded faux bone seal/cameo. Materials: Brass, wood, polymer clay. To be filled with pulp metaphysical accouterments. This will hopefully be a very high end cabinet of curiousities piece or set of movie props when done.

3) Spring-shocked Goggles. Materials: Brass. Leather padding and straps to be added. Lenses to be added if/when I ever get myself to the optometrist.