So, we’re back from the Steampunk Symposium, cooling our jets for a few weeks (read: working frantically on other things and preparation for coming conventions).

We had a great time; Aloyisius and his team put on one extraordinary event, and did one seriously good job of keeping everything organized and running splendidly. We would *certainly* love to come back next year to see the next and bigger version of this convention. Many triumphs to expand upon, and, as far as I can see… no mistakes to learn from and that is an incredible feat for a first convention.

I had several panels there, and I hope that people enjoyed them as much as I did… even the second one wherein “hungry” influenced my conversation and concentration a bit more than I would have liked it to have. I’ll learn from this and avoid early morning panels in the future if I can at all… but I did somehow manage to fill a whole hour, and keep people there and asking questions.

I had a tall stage, a big screen, and a digital projector… which I of course did not use. I suppose I like things to feel smaller and more intimate- and have always felt a bit out of place on a stage doing anything other than karaoke-ing 80s and 90’s post-punk tunes.

Outside of the panels, we spent most of the days at our tables, selling art prints and speaking with people – and I experimented by bring many large giclee prints on heavyweight fine art rag paper. I came up with this idea so I could add an alternative above our less-expensive and convention-priced prints, and below that of the giclees on canvas and original paintings/engravings.

In that, I learned pretty much what we had established before: To stick to the $5 through $30 range items. I did however establish that it is not the thought of carrying around some huge-sized canvas print that hinders sales there – but that price, is purely the reason.

People at sci-fi/fantasy/subcultural conventions, myself included, are primarily looking for clothing, accessories, gizmos, trinkets and such… and when it comes to art, they are looking for something more in the souvenir range… perhaps as a keepsake reminder of the convention, to have something that is signed, or simply to show some support for the artists they like.

I’d have to say my first thought whenever I arrive at any convention, is that if I make X amount of dollars, I am going to buy myself a cool vest, a nice pair of boots, a well-made pair of gloves, a new shirt, etc… why should other attendees feel any differently?

It is because of this that I had a thought: Next convention, I will focus more on the smaller prints, and otherwise I will bring the originals for the devoted buyers, and I will be bringing some new things as well… hand-crafted works in wood and brass, mechanical or just practical/handy/decorative… and I’ve got a lot of things in mind, all of which I am excited about having the opportunity to show and offer. I’ll have more on that when I have made them… for right now, it is a bit of a secret.

So, I return home with a great amount of fond memories of the convention, and souvenirs in the form of prints – special made for this convention. Each are rather large, printed on 390 GSM (super heavyweight) rag paper in fine pigment inks. Each are signed, and dated “Steampunk Symposium 2012”. These are *all* rather rare, one of a kind for their size… They are 13 inches by up to 24 inches. Most average about 13×20 inches, and are all beautiful and sturdy reproductions on my work.

I *thought* about offering them all as a set… and if you make an offer before any of them sell, I would be more than happy to offer them that way), otherwise: I’ll be putting them up for sale over the next few hours. There are some available now, and by morning I’ll have them all up and available, in their own category here:

There is only one of each, so if you see one you like, this is a good time, the only time to grab it.

So, what is coming up? Well, Jfax in June (Grand Rapids), In October we’ll be at Kokomo-Kon in Kokomo Indiana, and are hoping to be a part of Utopiacon in Cincinnati the week after. We’ll be trying to fill in many more spots as we can, hopefully some more guest spots and panels, but we’ll be looking at conventions to just vend at as well… maybe a few to simply enjoy attending. Please watch this space, and I’ll try to be much better about announcing our future appearances in the future.

Some of you may already be aware of this, but this year I am participating in Grand Rapids’ Artprize competition along with Bethalynne Bajema, Ted Jauw, Kate Jauw, Bethany Greenier, John Hyatt, and Cassie Truskowski, with our combined work CirqueACirca.

We are putting together a work of art nearly the size of two football fields (a very ambitious project for a couple of artists with less than two nickles to rub together). This work will be a huge undertaking to say the least, and will include circus and sideshow performance art, among many many other things.

We hope that it will become a gathering point for steampunks and other like-minded individuals during the competition, in a joint effort with the SteamPig display and several other steampunk exhibits through the vast art competition (over 200,000 visitors last year). Our space will have a lot of room to rest your feet and hang out, and costumed up visitors add the the feel of the piece.

We hope that you will help out by being there September 25th (the main gathering date), or any date between September 22nd through October 10th.

If you would like to more actively participate and help out, there are *MANY* ways to do so – from helping us starving artists to starve a bit less, to easing the strain of gathering materials for this huge project (we hope to use as much recycled material as possible), to lending a physical hand on the build, or just getting the word out for us (because every person you know may know someone interested, or the people they know might know someone interested).

Please link to us in your blogs, facebook accounts, myspace, twitter, or otherwise… because popular makes popular these days, and the more people our message reaches, the greater we can make this event. 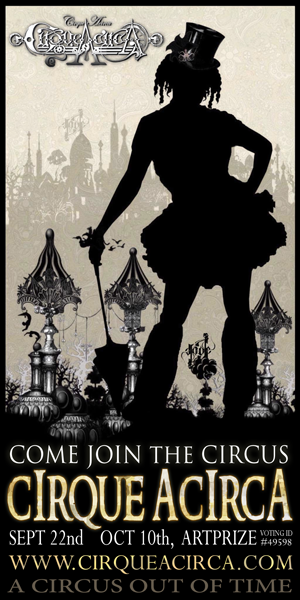 Artists: Those of you with a creative touch to help with painting and set up. It could be anything from plain flat painting to helping with the mural.

Carnies: Merchants who share our vibe and intent may rent tents to sell wares.

Players: We need people to dress up in a steampunk or circus fashion and just walk around while adding to the vibe!

Buskers: Do you have a fun talent to share? Juggler, stilt-walker, etc.? We have a place for you in Buskers Alley.

Oddities: Do you have a very unusual art to share? We have a place for you to create and show off your talent.

Stowaways: The price for your passage is to help keep our ship clean! We will need people to keep an eye out for loose ties or malfunctions, pick up trash, make sure signage is still in place, etc.

Acts: Looking for acts willing to work with us to develop great shows and have an opportunity to show off your stuff.

And the rest: Did we fail to mention something? Let us know! There is a place for you in our circus!

I had a blast at the world steam Expo.

WSE was incredible – so many great bands, many more great people. I had no idea so many people already knew my work… and to add to the awesomeness of the event – I got to hang out with Captain Robert and Daniel of Abney Park, Lex Machina, Emmy, Bethalynne’s Nieces, and of course Bethalynne and after hours. A lot of good drinks were had, and many many good times. It was possibly the most incredible night of my life (so far).

I have put a very intensive review and recap HERE on my facebook fan page (no point in duplicating huge posts all across the net). It is open for anyone to read, you don’t even have to add me.

Also, for those who are here after meeting me at the convention, especially those from Michigan and from Grand Rapids – I really, really want to hear from you, so please don’t hesitate to write me, add me, whatever it is that will allow us to keep in touch.

Thank you for a wonderful experience and for all the wonderful times.