Painted in acrylic on tempered hardboard backed with birch, 12 by 24 inches – added to the airships and tentacles series because I might as well – since the book is not yet compiled and won’t be in time for Holiday selling.

I’ve been having a rather not so spectacular month – with lots of things I need to catch up on, and sickness, fatigue, and finances getting in the way at every turn it seems. Christmas season is always terrible on artists, especially us for some reason – and we hoped to be on top of it this year by finally offering calendars and greeting cards… all we ended up doing was using a lot of valuable time laying these things out – and though I closed down most of my store to get people to shop over there, I think all I have done is to cut ourselves further out of holiday sales.

When there is nothing else I can do, I paint – and this one is the product of a few multi-day – never leaving my table except for restroom breaks – sessions.

The original, since it is already made, can ship immediately, but the giclees cannot ship before the 20th… making them scary last minute gifts, especially with all the last minute and overdue shipping I need to catch up on.

If this painting sells, I will be super happy, and able to catch up on many things, I’ll even be able to visit family for the Holidays – which would be super-awesome. 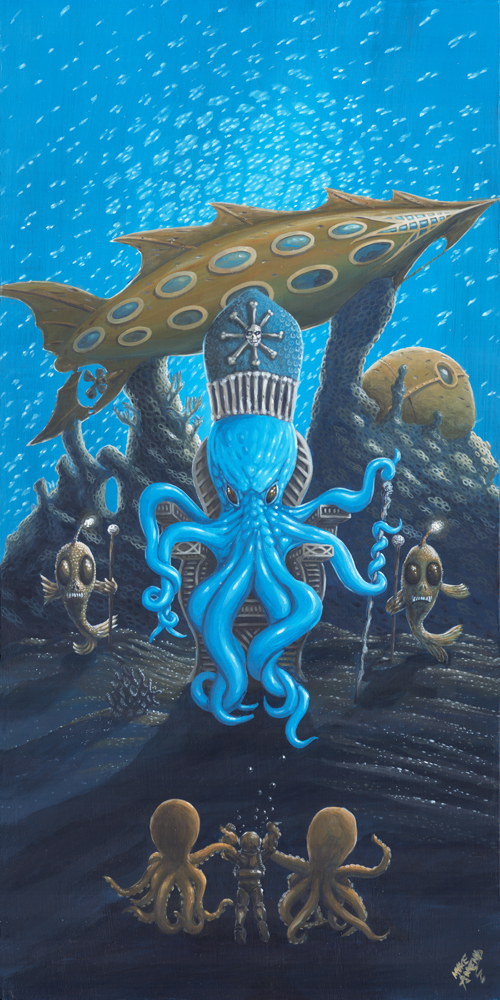 Available as a giclee here: https://mykeamend.com/new/products-page/all-products/the-mighty-bloop-24×12-inch-signed-limited-giclee/

Original Painting Available here (until the 11th, then if it hasn’t sold that day, it’ll be available here again): https://mykeamend.com/new/products-page/all-products/the-mighty-bloop-24×12-inch-acrylic-on-board-painting/ 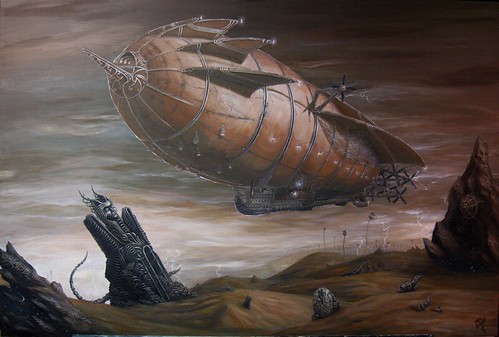 I was asked earlier today what the status (particularly current remaining count) of the 32×22 (full sized) giclees are, and since I feel it may interest repeat visitors and new visitors alike, I thought it would be good to repeat the information given here:

Of 50 to be made, ever (no “Second Editions”, no “Bonus Editions”, no “Super-duper Extra Golden Millennium Editions Plus!!!”), minus the one I am keeping for myself, 10 remain.

Of those 50 “the Rescue” giclees, 2 have been stolen (1 disappeared in shipping and was replaced with the next print, 1 was stolen from an owner), 2 have been destroyed (1 accidentally, 1 purposefully).

That leaves 46 existing, meaning only one in 139,417,298 people planet-wide will have one of these things when they are gone.

I am saving 3 for upcoming gallery shows, 1 for myself, and I keep 1 print on hand for every print that is in transit (to have a replacement on hand for those who order, just in case something goes wrong).

So, when another 5 of these have sold, they’ll be out of stock online, and I think they’ll have pretty much seen their last Holiday season here.

I say these things not to pressure anyone into buying, but as a heads up. And my refusal to release future separate editions, is to protect and ensure the value of those prints purchased from me.

I do 1 set of full-sized limited editions from each of the three support types (metallic, canvas, and fine art rag paper), and any open editions of any of those support types are at a reduced size – and of course un-numbered and un-certified.

Thank you for visiting – thank you everyone who has purchased prints here (and enabled me to make artworks for a living) – and thank you everyone else who has made this possible – for every blog, every article, every friendly link or friendly mention, for every url scrawled out on a bathroom wall, and every child named “MykeAmend.com” – You people are incredible, even those of you which don’t exist but might.

The other contest (my Twitter / Twitpic one with the picture guessing)  that one is still going. Thank you all participants, I will make sure you all get something extra for playing. ]

I’ve been wanting to hold a contest for a while, but aside from the paid raffles at Random.org, wherein I would have needed to either have a raffle – I couldn’t think of a decent option… until today.

When I was looking through old orders today, I remembered that all orders from my store come with a purchase ID!

Currently (at the time of this posting), the most recent purchase ID is 210.

Purchase IDs are auto-generated by the store as purchases are completed, and an email containing this purchase ID is automatically sent to the buyer via email.

Since 10 purchases, big or small would be nice to have, and not to ambitious a goal: I am going for purchase ID 220 – Purchase ID 220 will be the winner, and the winner will now almost immediately whether or not they won.

If your email receipt says “purchase #220”, you win – if paid for by e-check, winner will be declared if/when the e-check clears and not before, a canceled payment or bounced e-check for the winning purchase of course disqualifies the winner.

The winner receives a limited-edition and hand-embellished Antarctic Expedition Giclee**, or the original 5×7 engraving for “20,000 Leagues Under (the Nautilus)” – their choice. No cash value can be substituted for winnings – I am an artist and therefore do not possess this “cash” you speak of.

** For the giclee, I will even cover up to $15 of the shipping cost – meaning if you are in the States, shipping is free. This item will ship rolled, not stretched and mounted – so shipping should still be relatively cheap if not free wherever.