Think of a visual representation of a statements or concept, as a series or a single image.

Consider a style or media that would be striking, and imagine it taken to a level beyond your ability.

Research said media if it is new, and think on the concept or image for a while – but not so long that something new takes its place – because the longer this thought process, the more ambitious it should become.

Once the thought of even trying begins to fill you with an equal level of dread and excitement, begin.. even if it is after your bed time.

Don’t stop until it is looking as good you had hoped, because this is the *true* starting point. Now work to take it even further, as far as the piece demands, beyond whatever level of ability you  thought you were limited by.

Walk away regularly with the image in your head, process it, think of the parts you like, the things you don’t, and things you would like to add.

Remove and go over anything you have doubts about without mercy.

Add in only what won’t crowd the piece

When you reach the point where any change will only make it “different”, but not “better”, you are done.

“Sometimes I’ve believed as many as six impossible things by breakfast”, is a good phrase to remember.

Most *Everyone* draws at some point in their life. Those who are intrigued by failure, inspired by the seemingly impossible, continue beyond the point of jagged teeth and crayoned stick fingers.

An artist should never seek to do what they already know they *can* do – and perhaps such is the evil in commissions, which are most often specified according to past works, and limited by scope. Not that all commissions are bad – an artist must accept only those that allow the artist a fair share of creative freedom, as well as room, opportunity, or even obligation to try something new.

An artist who finds himself or herself with extra money, tends to spend it exploring a new mode of art, a new mode of printing, or trying to break into some bigger and more time-involved media or project. It isn’t that we are without wisdom, we know what is wise, and choose to ignore it out of a strong and passionate love for art. Buy canvas, sell paintings, buy scanner, sell reproductions, buy printer, sell giclees, buy lithography press, sell lithographs, buy bigger canvas and better paints, sell paintings, fret over a choice between crowns or a big chunk of marble, sell sculpture, buy clove oil … some ramen noodles …and a better chisel.

When I first started the “Airships and Tentacles” series, in wow… 2006… I don’t even think that “Air Kraken” was a word yet, though I could very well be wrong. I can’t remember specifically, but given Final Fantasy’s tendency to make *some* version of every base creature for each and every environment, it would be insane if they never had some sort of airborne cephalopod in all those years.

Yes, It is foolish of anyone to believe they invented anything… logs and stones rolled down hills long before the wheel, and there is sure to be a comic book from the 60s or illustration from the 1800s with flying cephalopods *somewhere* – and a hundred movies and books in-between. I am only saying I hadn’t yet seen them in paintings, especially luminist and/or American arts-movement-styled paintings, and I thought it would be fun to add hints of in the first painting – and loved that touch enough to continue it through the series. 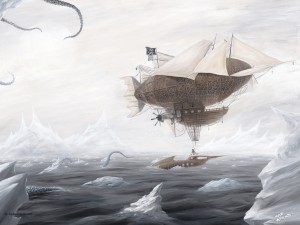 My airships, started with a commission for Robert of Abney Park, based on the existing designs by Eliza Gauger, which may or may not have been based somewhat on an equal interest in things such as Final Fantasy. The fun of imagination, came more in execution and styling, and moreso in the landscapes themselves. Over time, as the result of much research on bag sizes, gas content, altitude, temperature, etc… balloon sizes grew, ship sizes and engines shrank – I also started to lean more towards the stylings of DaVinci for wings and other parts – and mixed a bit of the aesthetic stylings from my favorites like Derek Riggs, Michael Whelan, Brom, Bethalynne Bajema, Gustave Dore, Pieter Breughel (E&Y), Zdzislaw Beksinski, and others wherever characters, creatures, scenery, or technology allowed.

Anyway, I wanted to do a series of what is essentially landscape art, explored by this fascinating mode of travel – as a means of adding a human element for the viewer to view through, without focusing on figures so much as to make it “character art”.

I sought to combine Lovecraftian elements and mythos with Vernian machines and aptly romanticized visions of exploration; in this, I also wanted to hide every bit of my usual dark and spooky art in such a way that it goes mostly to completely unnoticed.

The latter is most likely why this series was the first series I ever did that people *both* liked, *and* would hang on their walls (Criteria: Does not scare children, much; Does not creep in-laws and future in-laws out; Does not give the potential future girlfriend reason for pause; Does not get a cubicle-dweller fired).

I *thought* I was going to explore this into many, many other types of media – and planned to have a sculpture in wood and a sculpture in metal in the series of nothing else. But, I’ve done more paintings in this series than I intended to, and many, many engravings. The very last painting ships out tomorrow… technically that is not true, because there will be *some* of that in the Infernal device – but I am counting that as my sculpture piece to complete the series.

I’ve got one hell of a collection together in this – plenty enough for the book I committed myself to making works for. I’ll be releasing it in a time when dirigibles and flying Cephalopods have over these years become an odd sort of ‘norm’ (a subcultural standard that to most, comes out of *nowhere* for no apparent reason). The journey has been in interesting one, and I feel that alone merits the book’s release if nothing else… pending until all this Infernal Device stuff is under control.

Thank you everyone who supported the making of this series by buying prints, sharing links and such – and of course thank you  everyone who continues to do so.

I really have no idea what I am going to do from here, because I have *many* ideas and will have to choose one, or combine a few – but whatever I am thinking, I am sure going to look forward to it the moment I allow myself to look forward to other things.

Right now I am looking forward to getting the first build of the Infernal Device done, and looking to make it better than anything I could ever possibly do.

In celebration of the closing of the series (okay… I really need money to get my butt to Maker Faire Detroit), I am making large giclees of the very first image from this series available online. They are 30 inches by 24 (printed area is slightly less), and they are printed on fine art rag paper. I will also sign and date these. These are not limited editions – the reason is that the metallics and canvas prints I sold as limited editions, must always remain more special than any version I put out afterward. These are prints I make available in small quantities at conventions, with no set number to be made – but they beautiful, high quality, and they are the biggest prints of this  image you can get without buying one of the 4 remaining giclees on canvas.

If you would like one, these few prints are available HERE – and are only $100 until they  are gone.