Anymore, it seems my life can be summed up by a ‘to do list’, which I suppose is much better than the past decades where I could have used a ‘not to do list’ to work by.

Once in a while, I think to myself that I must have been more interesting as an insane person, and possibly even more likeable for some bizarre reason… but that thought is whimsical, fleeting at best – not because I think it is without merit, simply because I would much rather be the self who is typing this rather mundane entry, than any alternative.

I’ll be in Chicago next week – June 26th through 30th – at the Wizard World Chicago convention.

I am not quite sure, but I am mostly confident that there will be people in robes, turning things and people into chickens, which means it should be pretty exciting. I will however be very wary of anyone wearing a robe.

Aside from this, Bethalynne Bajema and I will have a table, and we will be selling things and signing things as if we were celebrities or something. I will not be showing my new comic book to anyone but co-conspirators, but I will be returning home ready to print … meaning I should probably find a quick and cheap way to make some sort of promotional whatsits with a release date on it… though I would always rather be doing than promoting things done… hence my lack of content here…

The last days, the next days…

I spent the 5 hours a day for two days and the last 22 hours programming and tweaking some super cool thing so I could get paid… only to find that there was a mixup and I was not supposed to start on it yet. Not that the job wasn’t approved… I will see my monies eventually… but the payment I was anticipating is not the instant reward I was anticipating in those hours I feverishly worked to get it done. I am kicking myself for not concentrating on other pressing things *hint* *hint*  I could really use some people buying some stuff to make up for my miscalculations.

Also hopefully be going to Salem to see those other printers and get that Abney Park painting back so I can ship it off to them.

This also means I will be able to offer prints of that piece soon (below).

It is called “The Rescue” and incorporates Vernian overtones with a lovecraftian feel, slight peril to keep it interesting but not too busy, the HMS Ophelia (Abney Park’s Airship), a somewhat Nautilus-like submarine, and of course Tentacles – otherwise the elders would never grant their seal of approval. I hate to say it is “steampunk” because the intention of the piece is to illustrate a story, and to make art – timeless art. I’d hate for it to only be seen for that, as much as it does apply.

If you would like to buy a 32 x 22 inch giclee on canvas at a very limited time presale price, I am selling two for $165 a piece plus S&H.

They will be Shipped between July 3rd and July 7th.

One is for sale here, the other here 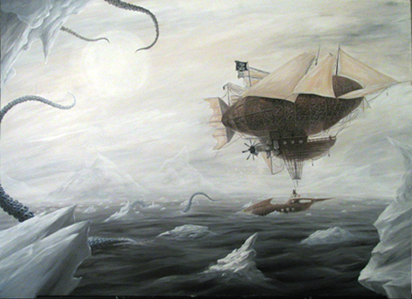